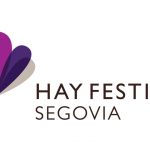 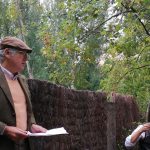 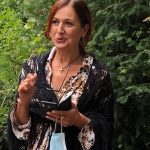 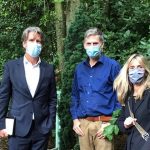 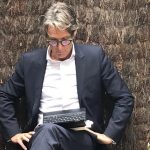 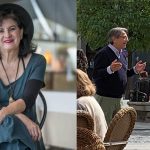 Juan Carlos Galindo of El País opens his coverage of the 2020 Hay Festival Segovia (Una arcadia cultural en el corazón de la pandemia) recalling that the Greek Stoic philosopher Epictetus said that what causes suffering in life it is not so much what happens to us but what we say about what happens to us.

Or, as the Spanish theologian and success writer Pablo d’Ors might say, this year’s event, staged against all the odds, amid uncomfortable but necessary hygiene, is not so much about welfare, but well-being.

For our well-being, the instincts of the body and the desires of the mind must be satisfied, as well as the longings of the soul. After all, longing is what all culture, all poetry, addresses.

As we do every year during the Hay Festival, we’ve addressed those longings, telling stories and reciting poetry in the Jardín del Romeral, not so much in tongues, but certainly in several languages, and not just with the invitees who were on the program (Maria Vale Portuguese Tourism Office Director, Joao Mira-Gomes  Ambassador of Portugal, Jan Versteeg Ambassador of the Neederlands, Christian Ebner Ambassador of Austria), but with impromptu guests I like to take the liberty of joining us, who this year included Aurora Luque, winner of the XXXII Loewe Poetry Award 2019, Amanda Kelly, a specialist in art communication, Dutch poet Bärbel Geijsen and Raphael Minder, The New York Times’ correspondent for Spain and Portugal.

Epictetus is recorded as saying in The Discourses that the rational animal is only unbearable for the irrational… Each of us understands in our own way what is rational and irrational, as happens with good and bad and useful and useless.

But reality is contradictory. So much depends on how we talk about reality, our distance from it, and what it tells us. I’ll leave you with some videos and one of the poems I recited at the festival, Distance, from my collection The Geography of the Sea Urchin.

There is a point
at which pain and joy
are equidistant,
and beyond which,
mine, yours,
the spines,
hurt more than they bring joy.
There’s nothing sad about them.
There’s no pain in things.
It’s the gaze.
Keep your distance.

P.S: As always 1000 thanks to Segovia Hay Festival Director Sheila Chremaschi, the President of the Hay Festival Caroline Michel,  the General Director of IE Foundation Geoffroy Gérard, and the owner of the garden El Romeral, Julia Casadevilla (Leandro Silva´s widow).