C.A.L.L.E. Hits the streets of Lavapies 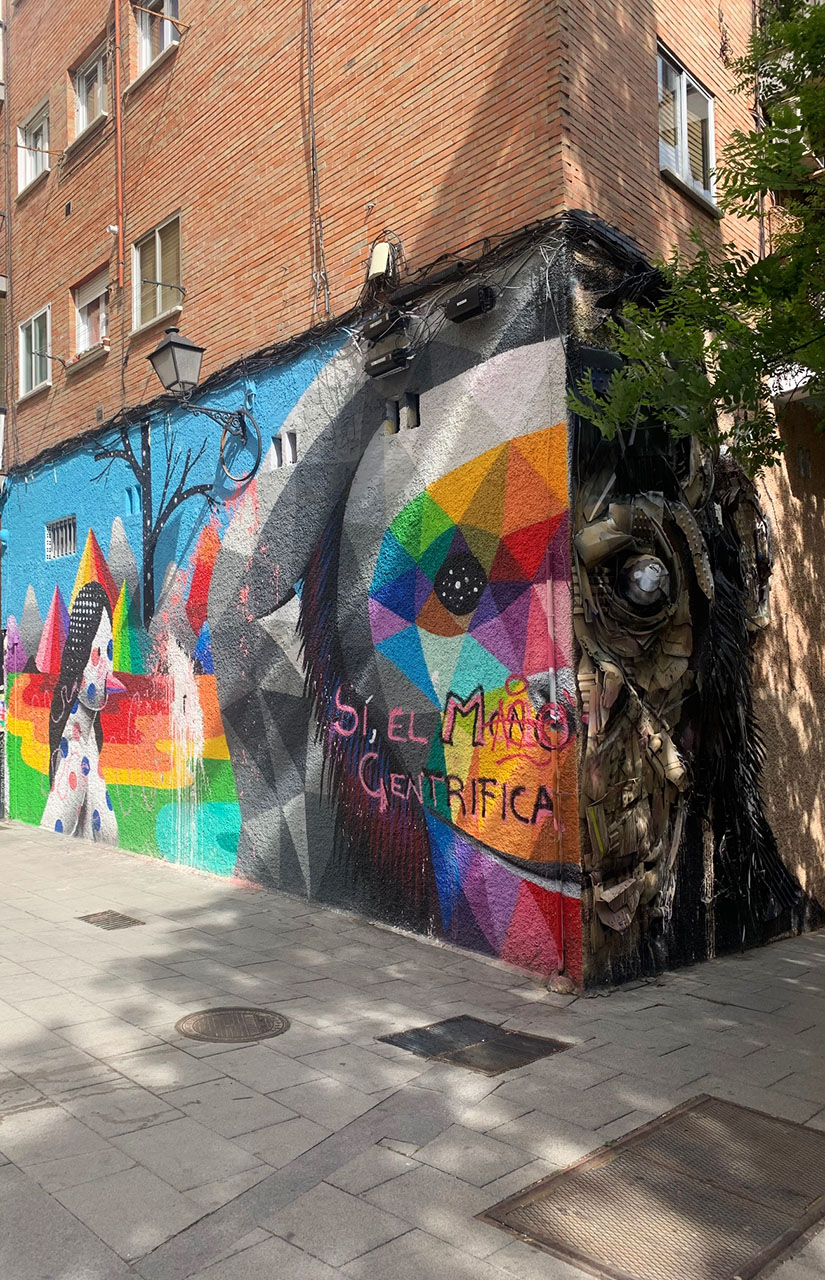 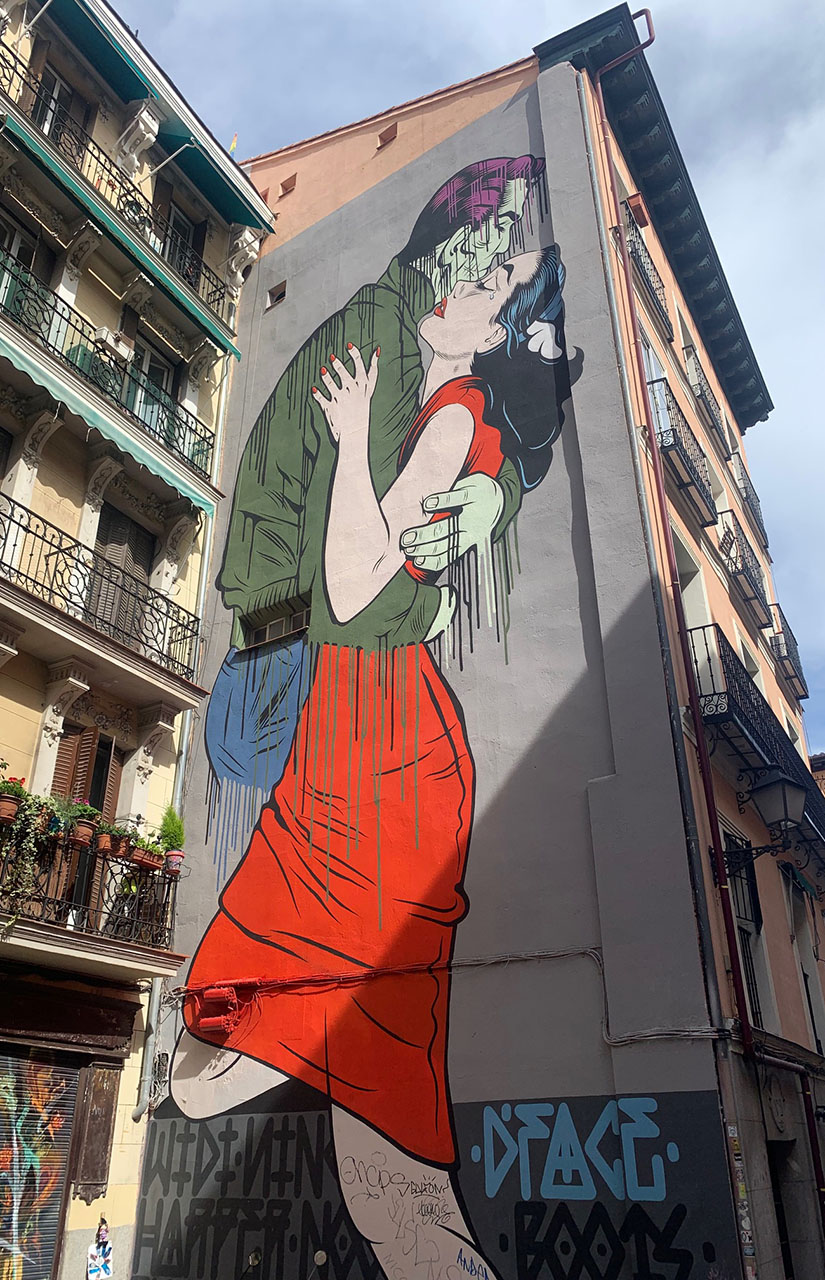 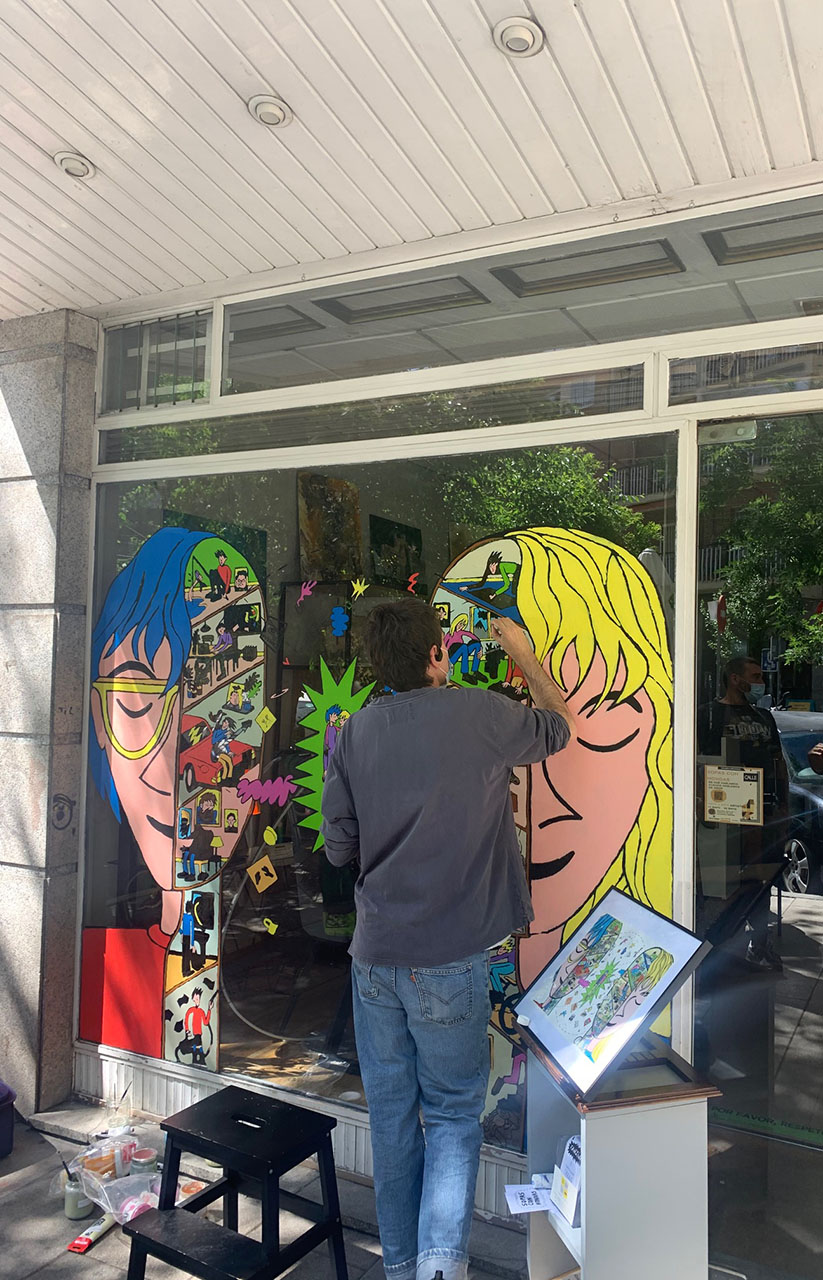 Once again, C.A.L.L.E. ,the annual urban art festival held in Madrid’s bohemian Lavapiés neighborhood, is hitting the streets: #pastron7. The festival opened its metaphorical doors on May 4, 2021, for the eighth year running, and will conclude on the 30th of this month, leaving works and messages of a different caliber. Don’t miss it.

A short walk through the area is enough for the stories of the street to start talking to you. You’d have to be deaf and blind to miss them. With any luck, there will be an artist at work. Don’t be afraid of them, they protest, they criticize, they bark, but they don’t bite. These aren’t street dogs. In the photo, Adrián Herrero at work on Sopas con hondas, a regular contributor to the festival. He’s one of those little Davids, and instead of slingshots, he uses brushes, to hit a brushstroke, to what he doesn’t see clearly.  Alfred López explains the origin of the expression dar sopas con honda, (which, fortuitously, can be rendered as “streets ahead” in English) in his blog Ya está el listo que todo lo sabe.

The TDP crew, Todos Presos, take a more combative approach: you probably won’t see them at work, but you can contemplate some of their art, like the one  here featuring Mickey. Remember that the penalties in the Spanish capital for painting where you shouldn’t range from 300 to 6,000 euros, depending on the size of the offending graffiti, and which building you’ve chosen to anoint. Repeat offenders can find themselves being shipped off, as they say in Panama.

Speaking of anointments, ZeCarrión likes to create controversy, as with  his Christ being hugged by a fan, the frontispiece of bar Juan Raro, at 7 Miguel Servet street. Equally polemical is his version of The Last Supper,  a la da Vinci, with trans apostles dining on pizza. It can be found at the Eccolo pizzeria, whose Italian specialties are rightly popular with the locals.

C.A.L.L.E. is about losing yourself in Lavapies’ labyrinthine streets, and turning a corner to be surprised by figures like this small but powerful Indian painted by Bolivian artist WillYakome, whose motto is La Amazonia no se vende, which also applies to the area, where he lives. It is located at the beginning of Dr. Fourquet street, home to several galleries.

If large murals are your thing, take in the mixedchimp at the OkudaSan Miguel, at 35 Embajadores street, which features the face of another ape, Portugal’s BordaloII. The two halves enhance the work as a whole. Good artistic symbiosis. The imposing mural Runaway, by the legendary D*Face, painted last year a few doors down, is equally fun. I’d advise you to get along to Destino, by  Boa Mistura, in Miguel Servet street, 16, before it fades away forever.

If you like company with your street art , take Javier García’s  CooltourSpain, and learn how a failed savings bank became a time bank. He will also take you to the Revolt record store, run by one of the members of the Kellercrew, along with any number of other surprises.  Tickets available from the website, along with news about urban art. If you get thirsty, try an Alhambra beer, which together with AsociaciónEnLavapiés and Madrid Street Art Project are sponsoring the festival. Enjoy!

P.S: There are too many artists taking part in C.A.L.L.E. to mention here. That said, here are a few more not to be missed: SaraFratini, who has a graffiti in Argumosa street on the corner with Salitre; along with El Rey de la Ruina, whose work often features hearts (the story goes that he suffered from a heart condition as a child). His vast Socialmente iguales. Humanament differentes. Totalmente Libres, from 2015, can be seen at 18 Embajadores street. 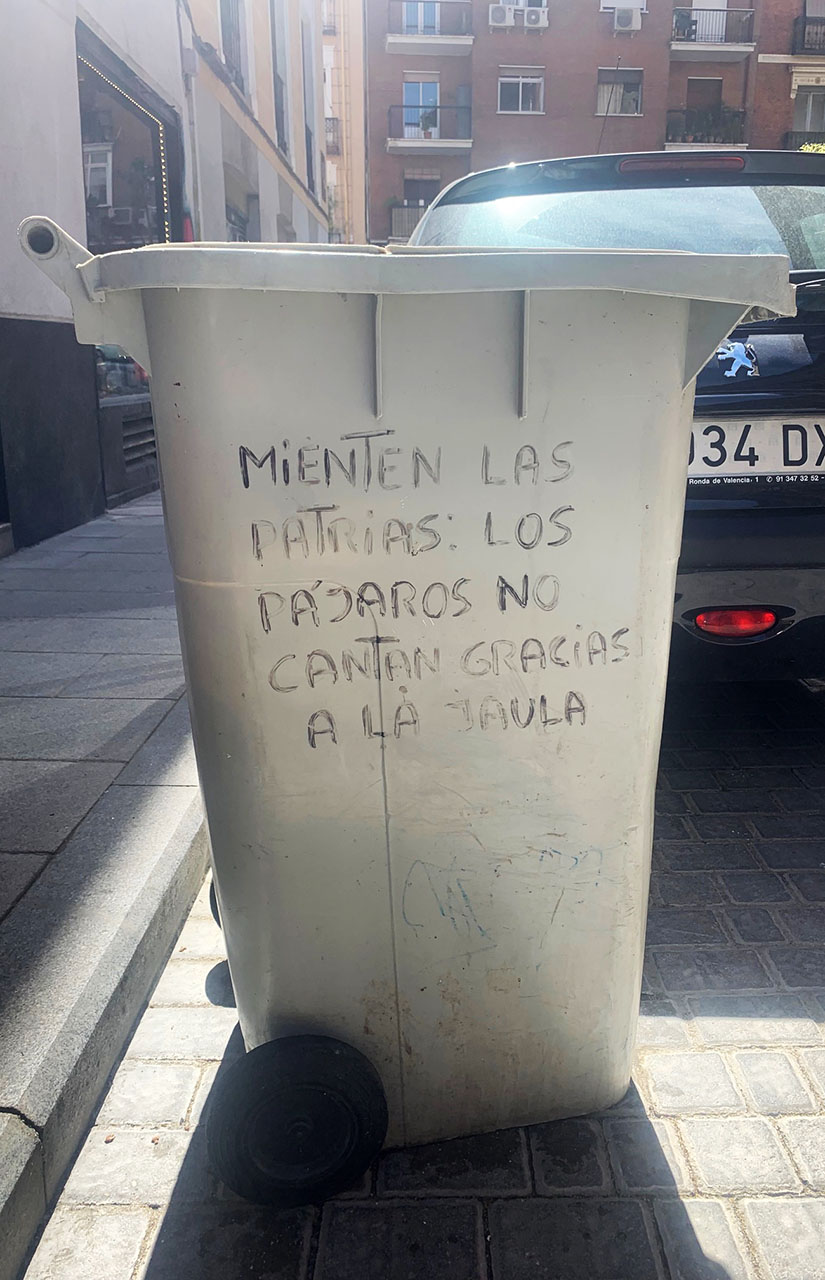 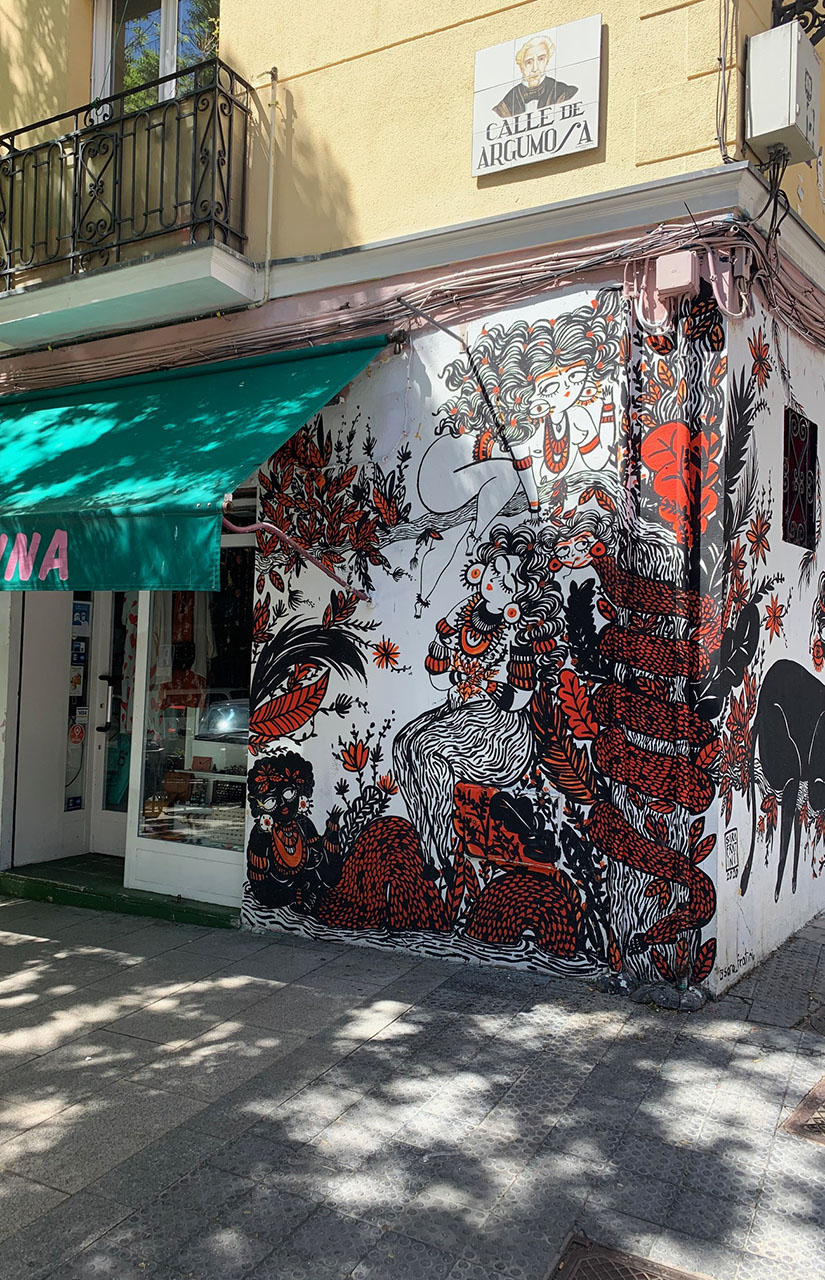 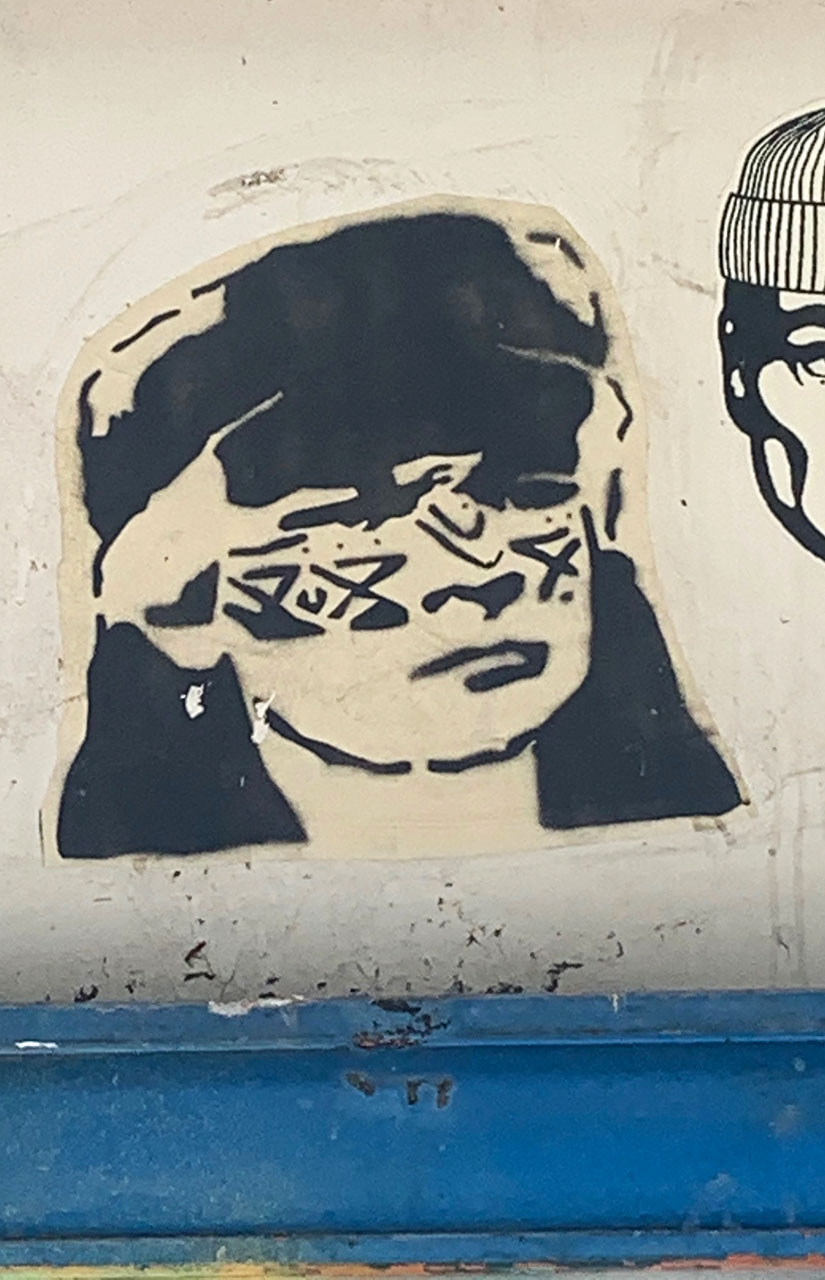 Wise words from Neorabioso, on a garbage bin on Dr. Fourquet street. The homelands lie: birds don’t sing thanks to cages

India, by Will Yakome, at the beginning of Dr.  Fourquet street.