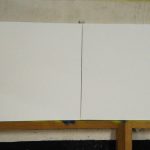 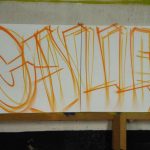 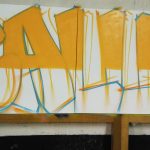 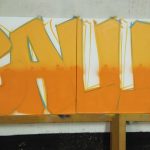 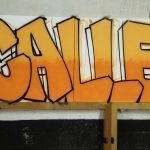 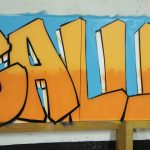 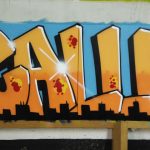 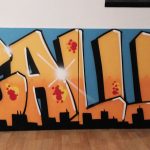 Graffiti is a process, like La Calle (The Street). Graffito by Pastron#7

“Calle”, a graffito by Pastron#7 at Madrid’s Durán Gallery speaks of freedom, in the place Where the streets have no name­, U2’s song.

Words and things both lose and gain meaning over time. Nowadays, we are anxious to go out onto the street again, and when we do go out, we are also anxious about how we go out. That is why the meaning of the street, as noted by Juan Hidalgo in his Vocabulario de Germanía in 1779, is so important. Germanía is a term for the argot spoken by Spanish convicts during 15th and 16th centuries. In that underworld argot, the street means freedom.

Pastron#7 says he painted CALLE (street) because in the graffiti world, the talk is always about the “street”, “street art” here, “street artist” there, ad nauseam. So he chose the Spanish word for street, calle, to protest the predominance of English in the arts, as well as in other areas.

“The street we say belongs to the king, and so no one can be forbidden to pass along it, except when it is to the detriment of the residents” –noted Sebastián de Covarrubias, in his Tesoro de la lengua Castellana (1611).

Today, U2’s song Where the streets have no name seems to make more sense than ever. A place where we come to understand that the most important thing is the street, any street, only the street, that sprouts from the city, like in this graffiti, proclaiming its freedom.

In this video, I read La calle, a poem from my collection Graffiti of the World, which won the Cuadernos de Laberinto prize.

P.S: This graffiti can be found at the Durán Online Gallery of contemporary art, curated by Consuelo Durán. For more on the language of Germania, the slang of prisons and criminals, I recommend El habla de un bravo del siglo XVII, the inaugural address given by Arturo Pérez-Reverte to the Royal Academy of the Spanish Language.

The street gives me a hard on. Art is in the street. You bet.
But not because of what some idiot thinks.
It’s not because of what some idiot paints. No way.
Art is nothing. You have to reach out to the world. Eat the street. The street is the story.
And then you go and paint. You grab everything you can. What you hear. What you see.
You give it shape and you make your hamburger, with everything, frozen fries included,
And loads of ketchup, and mustard, and some of that stuff you call art.
Don’t try to take the credit. The street is the fucking work of art. Don’t make me laugh, art
doesn’t rule the street. Come on then idiot, let’s see if you’re bigger than the street, when the
whole world is out there! You think you are! I know.
Eat your hamburger and clean your teeth properly,
Otherwise, your art will smell. You’re a pile of shit —dixit
the Street Hoplite, on Kent, between North 7 and North 6.