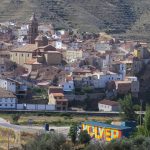 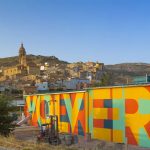 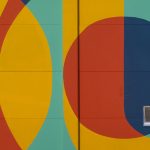 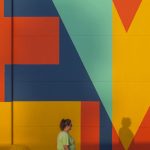 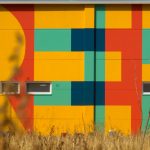 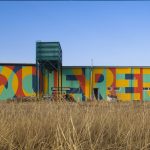 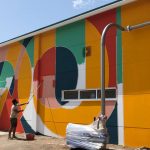 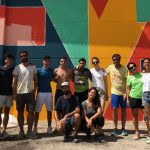 Casablanca and Boa Mistura’s graffiti, a combination with a story to tell of yesterday and today.

One of the many great things about the movie Casablanca is the way it shows how life changes as circumstances change. In Casablanca, a banker can be reduced to a nobody and a nobody to even less, but they are all reduced to doing the same thing, waiting and waiting, under curfew, for the winds of fate to change and carry them away from Casablanca. This change is wonderfully revealed in the final scene of the film, in which the birth of friendship, between Rick and Captain Louis Renault, balances, compensates, transforms, through a kind of poetic justice, the love that is about to be carried away.

Different circumstances, different times; but the transformation that our feelings and our lives must undergo to adapt to the times and survive is no different today. We all want to return to a state where our feelings are in balance. It doesn’t mean returning entirely to what used to be.

Instead, it means returning to something vaguely similar, which somehow compensates for what was lost, and warms our heart. The Chinese say if we want to know the new we must warm the old (温故知新 wēn gù zhī xīn).

This Querer Volver (Love to return) by Boa Mistura has also been transformed. It was created to beautify an olive oil mill in the near- abandoned community of Oliete, in Spain’s eastern Teruel province. In the summer of 2019, already an eternity ago, to highlight the problem of rural depopulation, Apadrina un olivo (adopt an olive tree), supported by the Botín Foundation, invited Boa Mistura to provide words and images for the initiative.

In keeping with its mission is to give art social impact, Boa Mistura invited 17 young people from different countries around the world to help out, painting and making Oliete attractive, so that people would love to return.

That’s the thing about art. It’s born from a specific idea, but it evolves and transforms through interpretation. Now we all want to return, not to that village and its murals, but to those lives, which have somehow gone away, as people have gone away from other villages in Spain. The mural has taken on another meaning, another life.

There is no other phenomenon in Europe like the one taking place in the Spanish provinces of Soria, Teruel, Guadalajara, Cuenca, Valencia, Castellón, Burgos, Segovia and La Rioja), which have become known as the Lapland of the south for their combination of long, cold winters and a population density of less than seven inhabitants per square kilometer in an area twice as large as Belgium and with a population of barely 450,000.

This morning I visited Boa Mistura’s workshop. I couldn’t resist buying a fragment of a dream on paper, shown here, which was the color study that Boa Mistura made for the final mural. Love to return, return to love.

-Where are you going to put it? – several people asked me afterwards.
-I don’t know,” I answered, while an inner voice asked me, “Is there a place for dreams?”

“We’ll always have Paris,” Rick tells Ilsa in Casablanca, until the whole world crumbled and everything happened that happened, and Rick turned it into the famous “Louis, I think this is the beginning of a beautiful friendship.” Let’s see what starts now.

P.S: I didn’t know them at the time, but in 2018, I took part with Boa Mistura in the Versos al paso project in Madrid. Pastron#7 painted this graffiti Calle (brilliant!!), and after contributing to my book Grafitis del Mundo, he introduced me to the crew personally. An eye opener!!!!